Electricity generation and carbon emissions
The process of generating electricity through the burning of fossil fuels (coal, oil, and natural gas) is the single largest contributor to carbon emissions in the United States, according to the Environmental Protection Agency.  Carbon dioxide and other greenhouse gases have been linked to global warming and associated health and environmental issues. 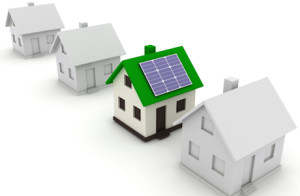 Solar power generation
Solar panels use the energy of the sun, a renewable resource, to generate electricity.   By generating their own clean solar power energy, homeowners offset electricity that would otherwise have been generated using traditional means.  This allows homeowners who have a solar panel installation to make a positive impact to the environment every single day; if the sun comes up, carbon dioxide is being offset!
A typical solar power system for a home in a 3 bedroom, 4 person household will offset nearly 150,000 pounds of carbon during its first 20 years of operation.  That’s the equivalent of saving over 10,000 gallons of gasoline.